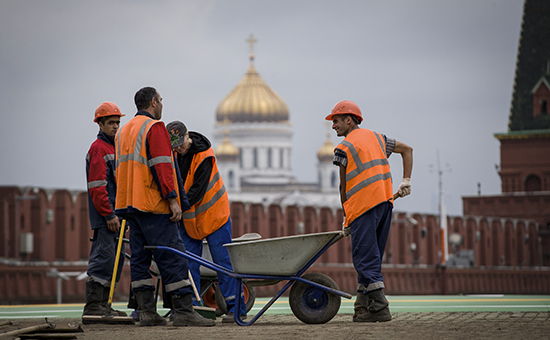 Workers flatten soil around helicopter landing pad in Moscow’s Kremlin, Russia, on Tuesday, May 28, 2013, with Christ the Savior Cathedral in the background. Very soon Russian president Vladimir Putin will be able to fly by a helicopter from his residence in Novo-Ogaryovo outside Moscow straight to his office in the Kremlin and back home. For this purpose quite a substantial work is nearly done within the Kremlin walls to turn a corner of the ancient Tainitsky Garden in the Eastern corner of the Kremlin into a modern and properly equipped pad for the helicopter of the Russian head of state. The reason for having the landing pad for the Russian president’s special helicopter was expressed by Viktor Khrekov, Kremlin household chief manager: «In many countries a helicopter pad is located in the residence. Now we have a helicopter pad here.» (AP Photo/Ivan Sekretarev)